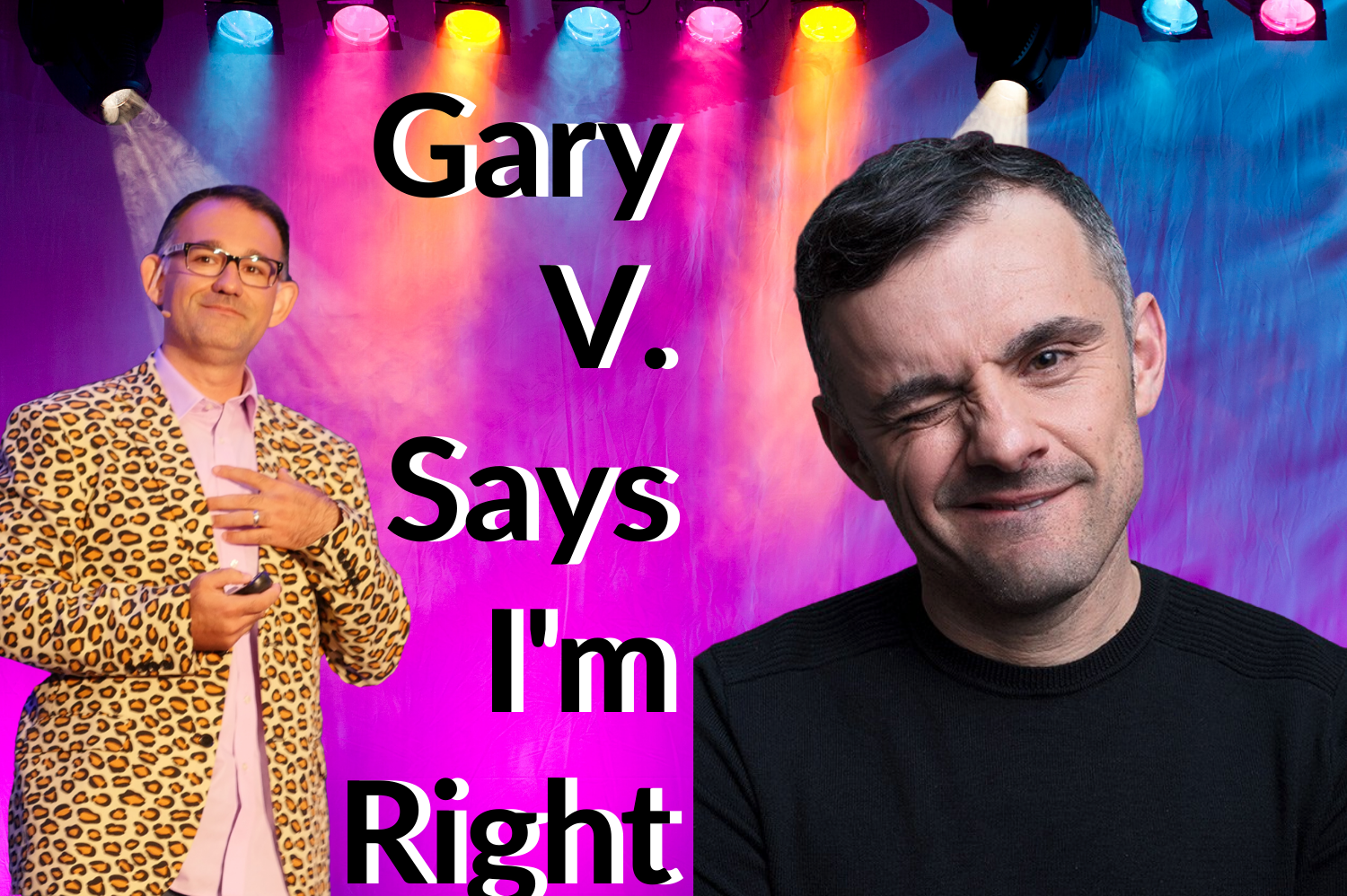 Gary says I’m right about content quality.  Well, at least Gary Vaynerchuk confirmed it when I saw him live with 3,500 other people at an event recently. If you follow my work you may have been taken aback as I tell people to not worry about the production value of their video content. Why would Josh – a guy with his background – denigrate quality video creation? Well, Gary said it, too! (So there! ??? LOL)

I draw distinct lines between content and advertising. They are two different animals which both have place in your overall marketing mix. While I ABSOLUTELY DEMAND quality with “advertising” I actually crave the opposite or at least the low side of the middle ground when it comes to content.

So, what did Gary actually say? He told a story about market research he did that says that millennials and younger are not “watching YouTube”, they listen to it.

They put on a video and run it in the background. They do other things as they intake information. The video screen could be black and it won’t matter in that situation. That’s possibly the most extreme version of permitting low quality video but consider your own habits on Facebook, Instagram, and even Twitter.  You likely do not look at poorly produced video and scoff. Maybe you remark at great videos now and then, but the opposite rarely seems notably offensive to our sensibilities so we give poor video quality a pass. In this world high frequency content flow we must allow room for video content that is “less than” in visual quality and instead focus on ideas that have value.

So, do we all just stop doing video?

No. People do watch video and the algorithms reward it. The reason they watch non-entertainment content receives different behaviors and expectations than the expectations one might have for a new Netflix Original.

This is why I focus on “Owning Your Expertise” online using video. Your expertise has value, your lack of perfect lighting doesn’t affect that value. Now, you can and should certainly pay attention to your brand image and aim for raising from OK to Good to Great. I love that. But NEVER let your perceptions of other people’s quality expectations stop you from delivering top quality ideas and expert information into the system.

The winners at this game don’t worry about what doesn’t matter.

You can hear Gary V on the topic of quantity versus quality. He makes awesome points… but he F-Bombs sooooooooo much. It’s his thing, he has no apologies. If you are offended by expatives, DO NOT WATCH THIS 😉

BONUS: DO NOT MAKE AWESOME VIDEOS – YOU WILL LOSE (by Josh Pies)

This video is about how over-produced content is a trap!

Josh Pies is a video advertising & branding expert. He’s spent most of his life work-shopping ways to get attention – be it sales for his first business which he started at age 4, customers for his property services company at age 23, or laughs and viewership on his first National TV Show at age 26 where he was producer and head writer. He believes in getting attention and loves the power of modern content creation for what it can do for businesses and personal brands.
Josh is the executive producer of C47 Film Associates. C47 Films has produced one feature film which is available on Amazon Prime, three TV Series, eight documentaries, and TV and web ads for brands as various as Kodak, The John Maxwell Team, and the US Department of Labor. Josh Speaks at events on the topics of video branding, how to stand out as a professional, and the power of purpose. Josh lives in Orlando Florida where he, his wife Shannon nd their three amazing kids play on the beach or in magical castles as often as possible.